Article by Reporter Sheila Wang of The Liberal Newspaper 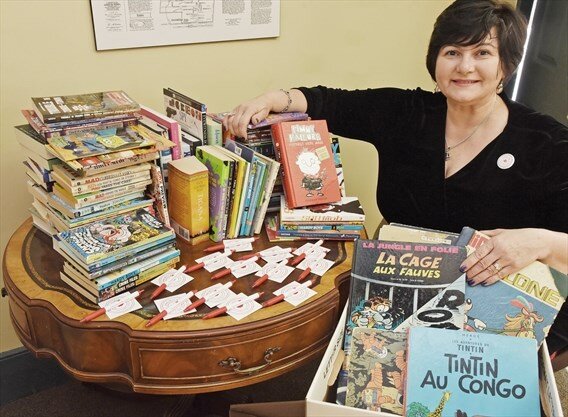 Josephine Vaccaro-Chang is running a book drive for the British Virgin Islands at the Open House for Women in Business event. Dec 20, 2019 – Steve Somerville/Torstar

A burgeoning local charity in Richmond Hill is asking for help to restock libraries in the British Virgin Islands (BVI), two years after catastrophic tropical storms ripped through the Caribbean island.

Project 99A, a not-for-profit organization founded in August, is raising funds through a GoFundMe page to ship much-needed books to the BVI, where floods washed away stacks of books and materials from schools and libraries.

“I really need some help getting these books down there,” said Josephine Vaccaro-Chang, founder of the Project 99A, a charity committed to elevating local and international literacy rates.

Vaccaro-Chang has been running book drives across Richmond Hill since August upon learning of the need for books from the BVI Reading Council.

“The schools suffered great losses … books, materials and structures,” said Lynden Smith, founder of British Virgin Islands Reading Council. “This has been the worst devastation that I have ever seen or even heard my parents talk about.”

Targeted at raising 9,999 books in the inaugural year, Vaccaro-Chang said Project 99A exceeded the goal within four months, thanks to the generosity of the community and volunteers.

However, a major challenge arose when it came to shipment.

It was not easy or cheap to ship thousands of copies of books to a vacation getaway some 3,000 kilometres away from Toronto, Vaccaro-Chang noted.

Thousands more are waiting to be shipped.

“It’s really a sad situation. Their bookshelves are empty,” Vaccaro-Chang said, hoping the community will step forward and contribute to the fundraising initiative to help cover the cost.

There are no direct flights from Canada to the BVI, and it is costly to bring books to the capital Road Town through shipping services, Smith said.

Project 99A is aiming to raise $4,999 dollars and it was still thousands of dollars short as of Dec. 18.

The BVI Reading Council, Smith told the Liberal, has been working to fully stock all the 15 elementary schools, four public secondary and many private schools on the island for many years in order to create a strong reading environment for the students.

“Then tragedy struck,” she wrote in an email, noting a flood destroyed countless books in many schools in early August 2017, followed by hurricane Irma and Maria, which wreaked havoc on all the schools and public libraries, wiping out her previous efforts.

She had to start over. Luckily, she’s got help from people such as Vaccaro-Chang and volunteers at Project 99A.

“We, in the British Virgin Islands, are eternally grateful to all who have been instrumental in helping us toward our goal of making our territory a community of lifelong readers,” Smith wrote.

“The ‘A’ was added to the name because we’re Canadian, eh!” the founder said.

Besides sending books to the BVI, the charity has also distributed books to local organizations such as the Richmond Hill Community Food Bank and Music for Young Children, as well as organizations in Malawi, Africa.

Go to www.project99a.ca for the upcoming events and book drives.

Sheila Wang covers municipal politics and general news in Richmond Hill and King Township. In addition to English, she speaks Mandarin. She loves reading, travelling and exploring nature with her dog Bear. She joined Metroland Media York Region in July 2018 after moving from Utah. She went to the University of Missouri and lives in North York. Follow her on Facebook @JournalistSheilaW or Twitter @SheilaWang7.